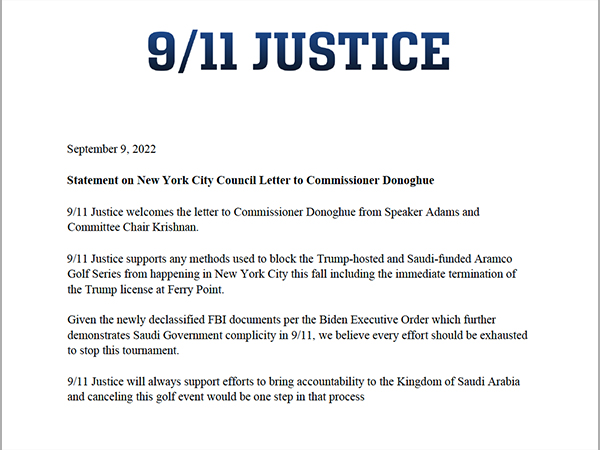 9/11 Justice supports any methods used to block the Trump-hosted and Saudi-funded Aramco Golf Series from happening in New York City this fall including the immediate termination of the Trump license at Ferry Point.

Given the newly declassified FBI documents per the Biden Executive Order which further demonstrates Saudi Government complicity in 9/11, we believe every effort should be exhausted to stop this tournament.

9/11 Justice will always support efforts to bring accountability to the Kingdom of Saudi Arabia and canceling this golf event would be one step in that process.

9/11 Justice’s Brett Eagleson was one of the family members that met with Mayor Eric Adams in an effort to cancel the Trump-hosted and Saudi-funded Aramco Golf Series.

According to the New York Times, the letter written by City Council speaker Adrienne Adams and Committee on Parks and Recreation council member Shekar Krishnan was sent to Mayor Adams and parks commissioner Sue Donoghue urging them to cancel the tournament and void the city’s contract with the Trump Organization.

“Public parkland should not be in the hands of Donald Trump or the Trump Organization,” the letter said. “Saudi-backed tournament does harm to the families of 9/11 victims and offends the public memory of that horrific day.”