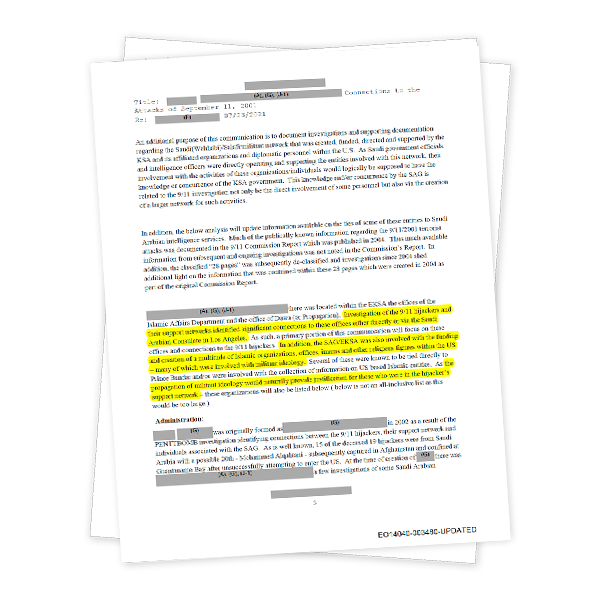 Attached to this EC is a document summarizing the connections between the 9/11 investigation and elements affiliated with the Saudi Arabian government in the U.S. 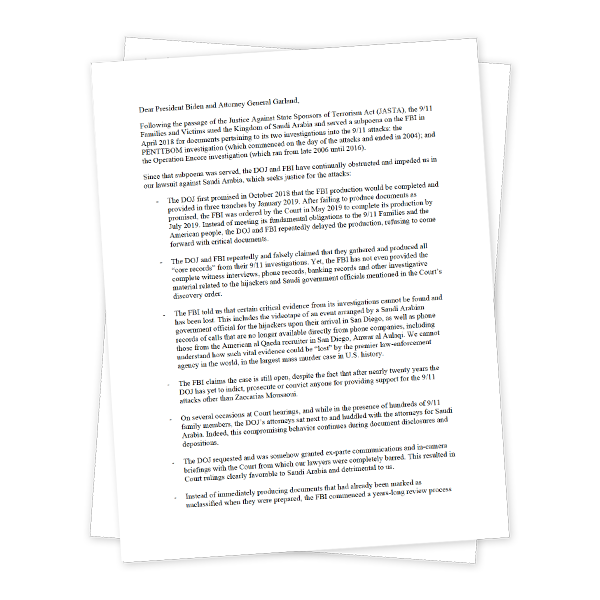 Over 2,000 9/11 community members signed on to a letter urging President Biden and Attorney General Garland to release the April 2016 FBI Operation Encore Final Report, all other DOJ-held 9/11-related material, and to allow our attorneys to work directly with the DOJ. It is time for this new administration to finally be a Department of Justice that works for the American people, rather than against us. 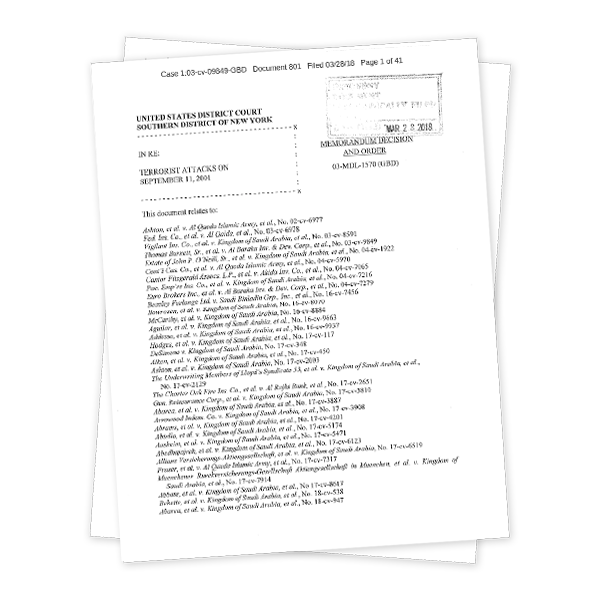 Judge Daniels‘ order defines the scope of our lawsuit’s discovery as, “Whether and to what extent Thumairy, Bayoumi and their agents took actions in 2000, at the direction of more senior Saudi officials, to provide assistance to Hazmi, Mihdhar and other 9/11 hijackers”. 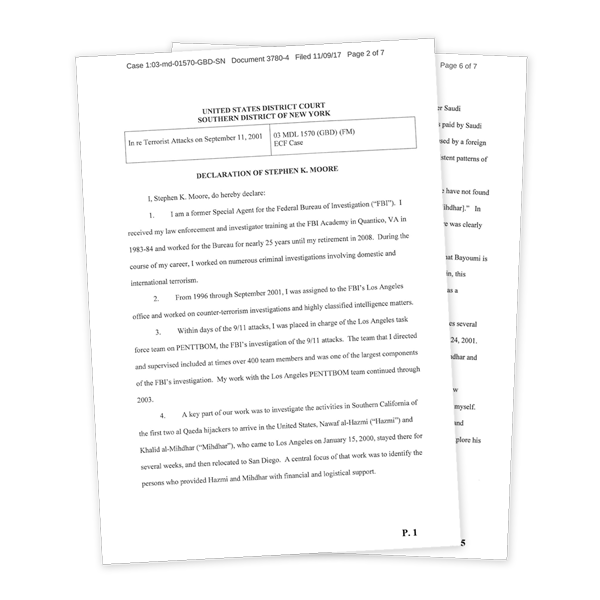 Sworn statement under oath from former FBI agent Stephen Moore regarding his time as head of the Los Angeles FBI 9/11 investigation from 2001-2008. Moore states that his investigation concluded that “diplomatic and intelligence personnel of the Kingdom of Saudi Arabia knowingly provided material support to the [first] two 9/11 hijackers [who entered the U.S.] and facilitated the 9/11 plot.” The findings of the Los Angeles FBI investigation undermine the 9/11 Commission Report finding that two known Saudi officials, Thumairy and Bayoumi, did not provide assistance to the 9/11 hijackers. Why did one of the largest 9/11 FBI investigations find credible evidence implicating 2 Saudi officials, yet this evidence was ignored in the 9/11 Commission Report? 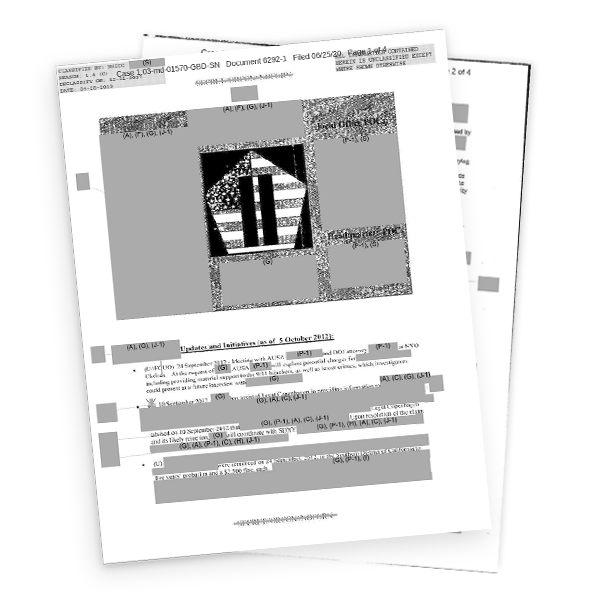 An October 2012 FBI Summary report outlines three main suspects in the 9/11 investigation: Fahad al Thumairy, Omar al Bayoumi, and a “third man”, who we now know to be Musaed al-Jarrah. The three are mentioned at the bottom of page 3 and top of page 4 in the sentence that states “main subjects include Fahad al-Thumairy, Omar Ahmed al-Bayoumi, and Musaed al-Jarrah. These subjects provided (or directed others to provide) the hijackers with assistance in daily activities, including procuring living quarters, financial assistance, and assistance in obtaining flight lessons and drivers’ licenses”. Jarrah’s name was released to the Families’ legal team following a meeting between the 9/11 Families and President Trump on September 11, 2019. At the same time Attorney General Barr invoked State Secrets on the remainder of the document. The name was later (likely accidentally) released to the public through a potential clerical error during an FBI filing in 2020. While the DOJ now argues that Jarrah was simply a theory tested out by the FBI at the time, our FBI consultants have told us that the phrase “there is evidence” is never used in an official report unless there is substantial evidence. It is unlikely that the DOJ would go to such lengths as to invoke State Secrets on Jarrah’s name if he had only been a speculative theory. This document was the first FBI document in this case to have State Secrets invoked on it. 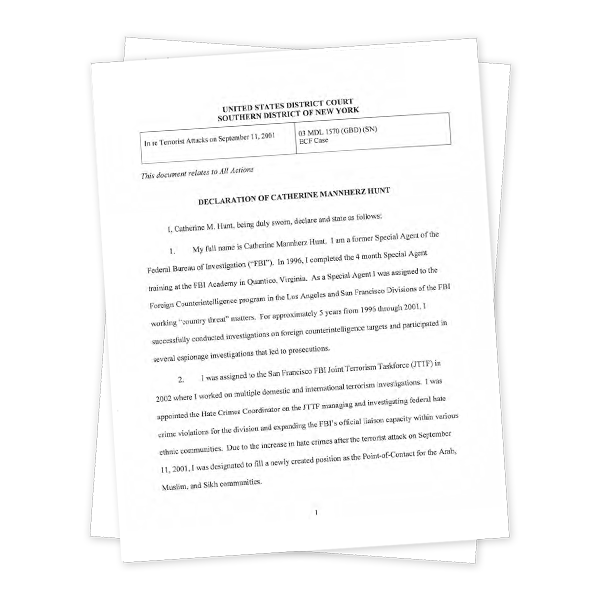 Former FBI Agent Catherine Hunt was hired by the 9/11 Families’ legal team in 2017 to recreate Operation Encore, the FBI’s 9/11 investigation which began in 2006. Her investigation focused on the 2-week period after the hijackers arrived in Los Angeles. Ms. Hunt identified and talked to key witnesses who the FBI interviewed between 2006 and 2016. 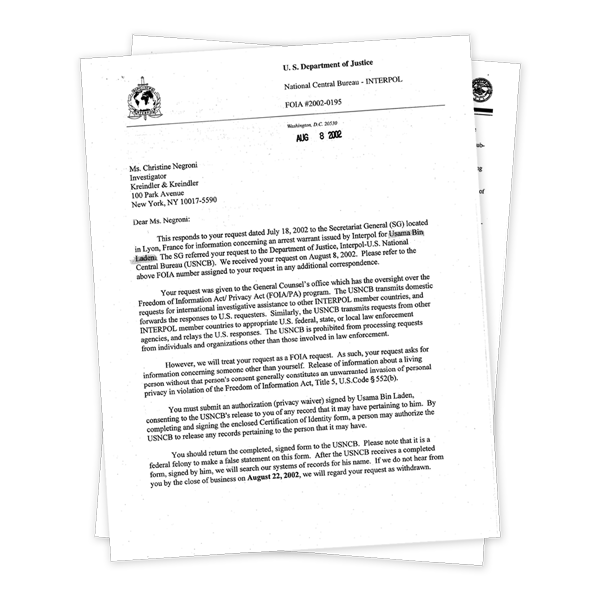 The 2002 D.O.J. response to the 9/11 families’ legal team’s request for a copy of the arrest warrant of Osama Bin Laden. The DOJ responded to the request stating that for the legal team to access this information, they had to have Bin Laden sign a release form for his warrant. The 9/11 families want to know why the DOJ protected the privacy of a known terrorist leader? 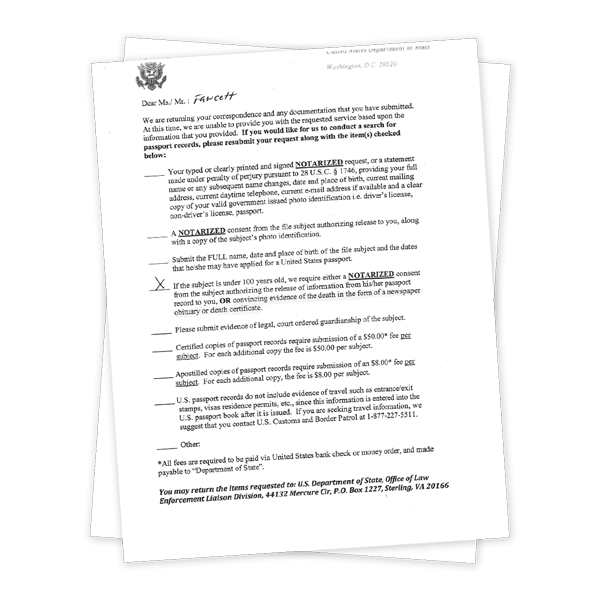 The 2017 DOJ response to the 9/11 families’ legal team’s request for copies of visa records for 3 of the main 9/11 hijackers: Khalid al Mihdhar, Nawaf al Hazmi, and Salem al Hazmi. DOJ responded to the request stating the legal team had to provide obituaries/death certificates for the hijackers to obtain the documents. Why, 16 years after the 9/11 attacks, did the DOJ continue to protect the privacy of the hijackers? 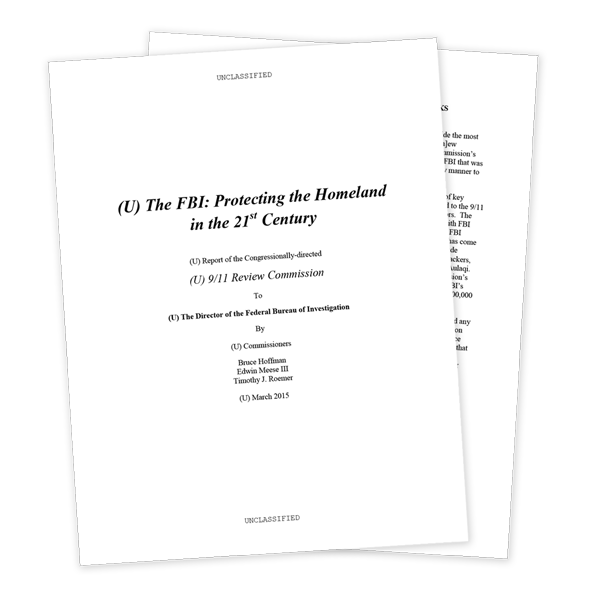 2015 FBI Review of original 2004 9/11 Commission Report. Highlighted sections from this excerpt mention two key pieces of evidence in our case. The first mentions 2 people who assisted the 9/11 hijackers based out of San Diego, al-Sadhan and al-Sudairy. These two men were later proven to be Saudi officials. The second highlighted section states that there was an additional individual tasked by al-Thumairy, a known Saudi official, to help take these two 9/11 hijackers assimilate when they were in San Diego. This section of evidence also allowed our legal team to track down the 2012 FBI report. What else was uncovered by the FBI’s follow-up 9/11 investigation from 2007-2016?