Letter to President Biden and U.S. Secretary of State Blinken 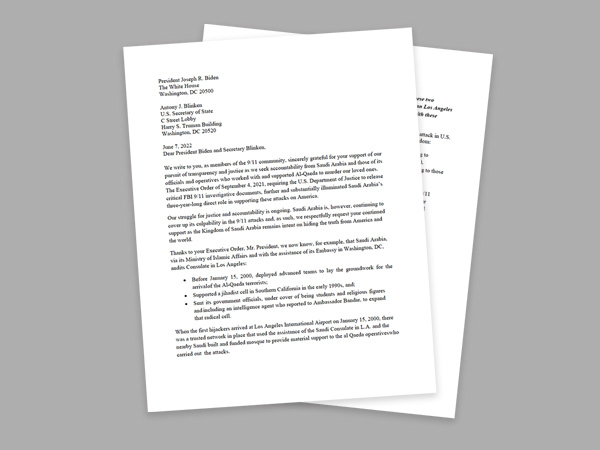 Ahead of the anticipated U.S./Saudi meeting, nearly 2000 9/11 family members have written a letter urging President Biden to designate Saudi Arabia a State Sponsor of Terrorism.

With President Biden expected to soon meet with Saudi Arabia Crown Prince Mohammed Bin Salman (MBS) during an anticipated trip to the region, nearly 2,000 members of the 9/11 community signed and sent a letter today to the President and Secretary of State Antony Blinken urging them to designate Saudi Arabia as a State Sponsor of Terrorism under the Export Administration Control Act, with all the economic and military sanctions that accompany that designation. The group also sent a letter to members of Congress requesting a first-ever hearing on Saudi Arabia’s responsibility for the 9/11 attacks.