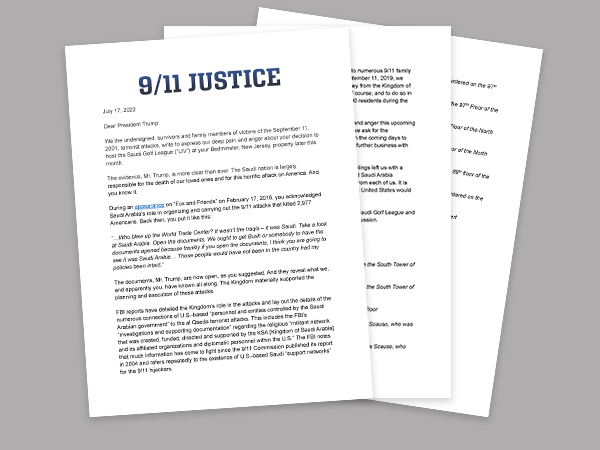 Family members of those killed on 9/11 and survivors sent former President Donald Trump a letter condemning his decision to host the Saudi-funded LIV Golf tournament at Trump National Golf Club Bedminster in New Jersey on July 29 & 30, 2022.

The letter addresses Trump's 2016 claims on Fox & Friends regarding responsibility for the September 11, 2001 attacks “…Who blew up the World Trade Center? It wasn’t the Iraqis – it was Saudi. Take a look at Saudi Arabia. Open the documents. We ought to get Bush or somebody to have the documents opened because frankly, if you open the documents, I think you are going to see it was Saudi Arabia…”

The 9/11 families’ letter requests the opportunity to meet with former President Trump so the group can share its specific concerns and urge him to “cease further business with the regime that was complicit in the murder of our loved ones.”